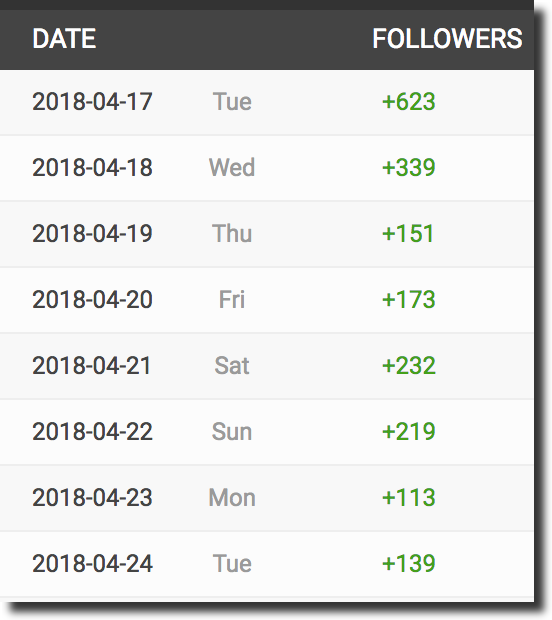 It didn’t grow from buying followers…

And it didn’t grow from using bots…

Instead, it was grown using a powerful marketing gem — free giveaways. 💎

See for yourself which strategy is the fastest and cheapest to get you you highly-engaged social followers.

Buying followers might sound cheap and effective… until you notice it gets you zero engagement.

Hootsuite did a test buying followers… and had some surprisingly depressing results.

But after a few months, not a SINGLE “follower” liked or commented on any of their photos. 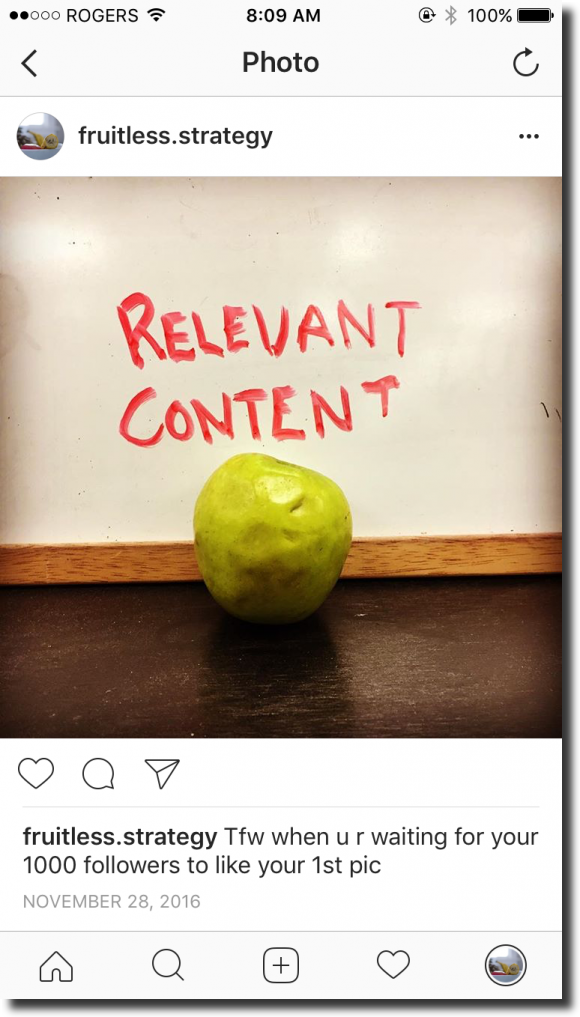 The amount of followers you have doesn’t matter if they’re all bots who don’t engage.

Compare buying followers to the number of qualified followers you get running a giveaway at the same cost (a $9.95 book prize)…

That’s what a team recently did with a fiction eBook.

The end result of their giveaway? 526 total entries and more social followers. Cha-ching! 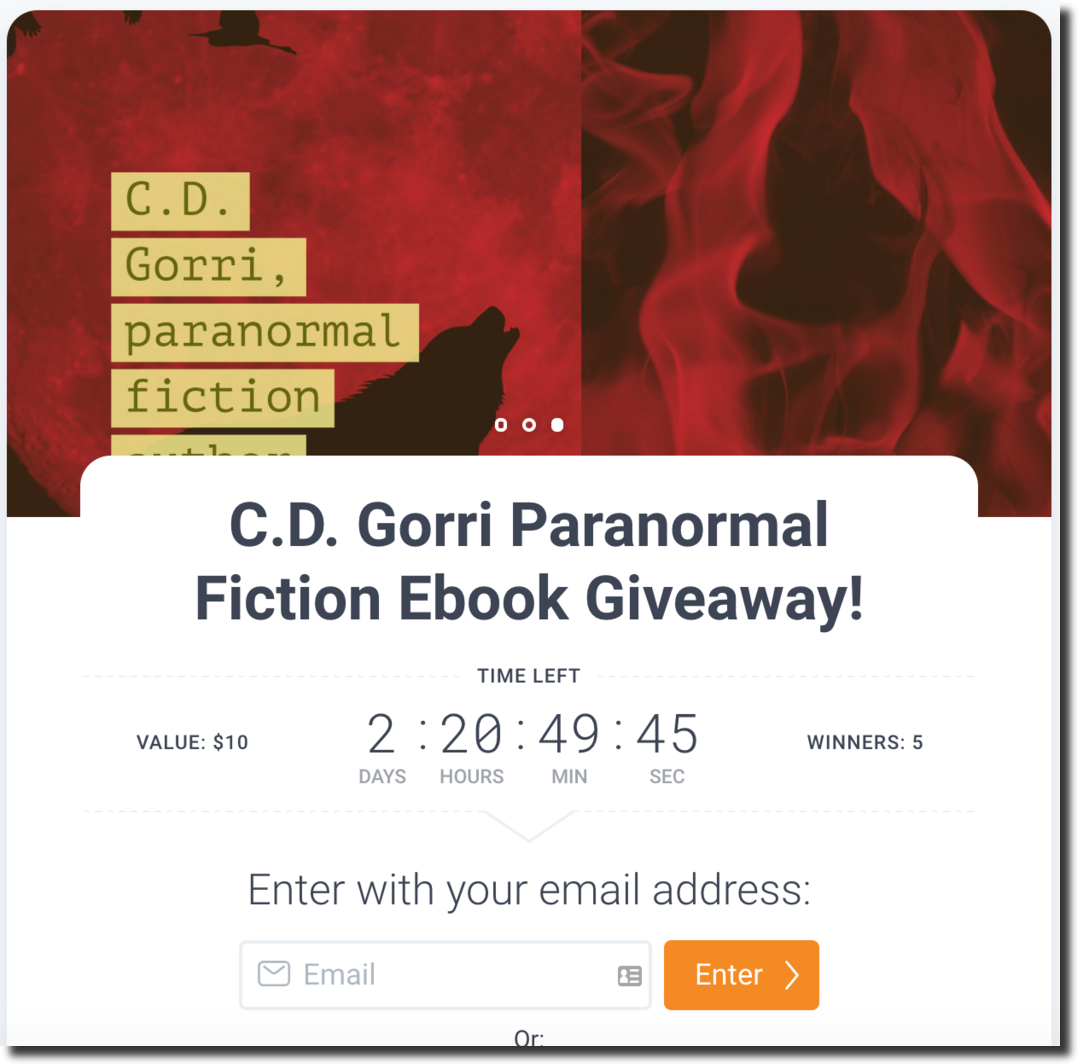 They kept their giveaway dead simple too.

Instead of spending hours trying to get new followers manually, they simply set up a giveaway that rewarded extra bonus entries if you followed their social accounts: 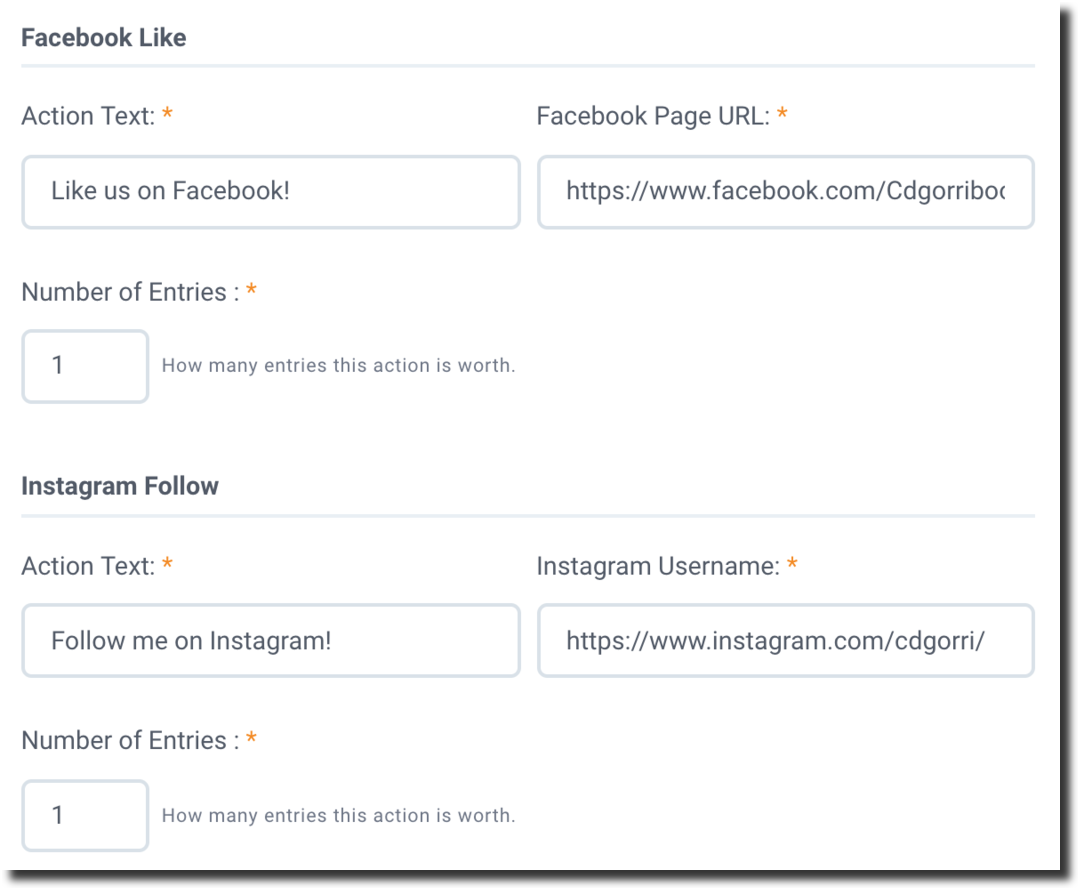 Win for entrants because they increased their chances to win.

And a win for the giveaway creator because they got more social followers FREE.

Following other people can get you followers…

But there are big risks.

It takes lot of time to follow (and unfollow) large amounts of people, and there are no guarantees it’ll work.

Some people turn to automation — but it’s still a terrible idea. 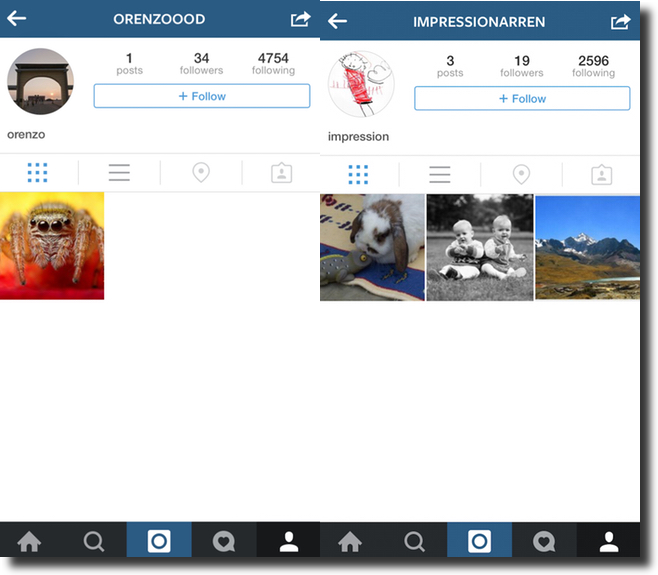 The worst part: Twitter was their largest referral traffic source. Getting banned dramatically affected their brand and business.

It took them 4 emails, multiple tweets to Twitter Support, and almost 3 weeks of waiting just to get the explanation email.

In the end, they had to create a new account from scratch. Back to square one.

Don’t get suckered into the “follow-unfollow” trap — there are faster, cheaper and safer ways to grow your social following, including giveaways.

For example, a giveaway user named Marie gave away a collection of her books.

From her simple giveaway, she got 5,357 entrants and HUNDREDS of new Instagram followers.

To get started, she made a simple offer. 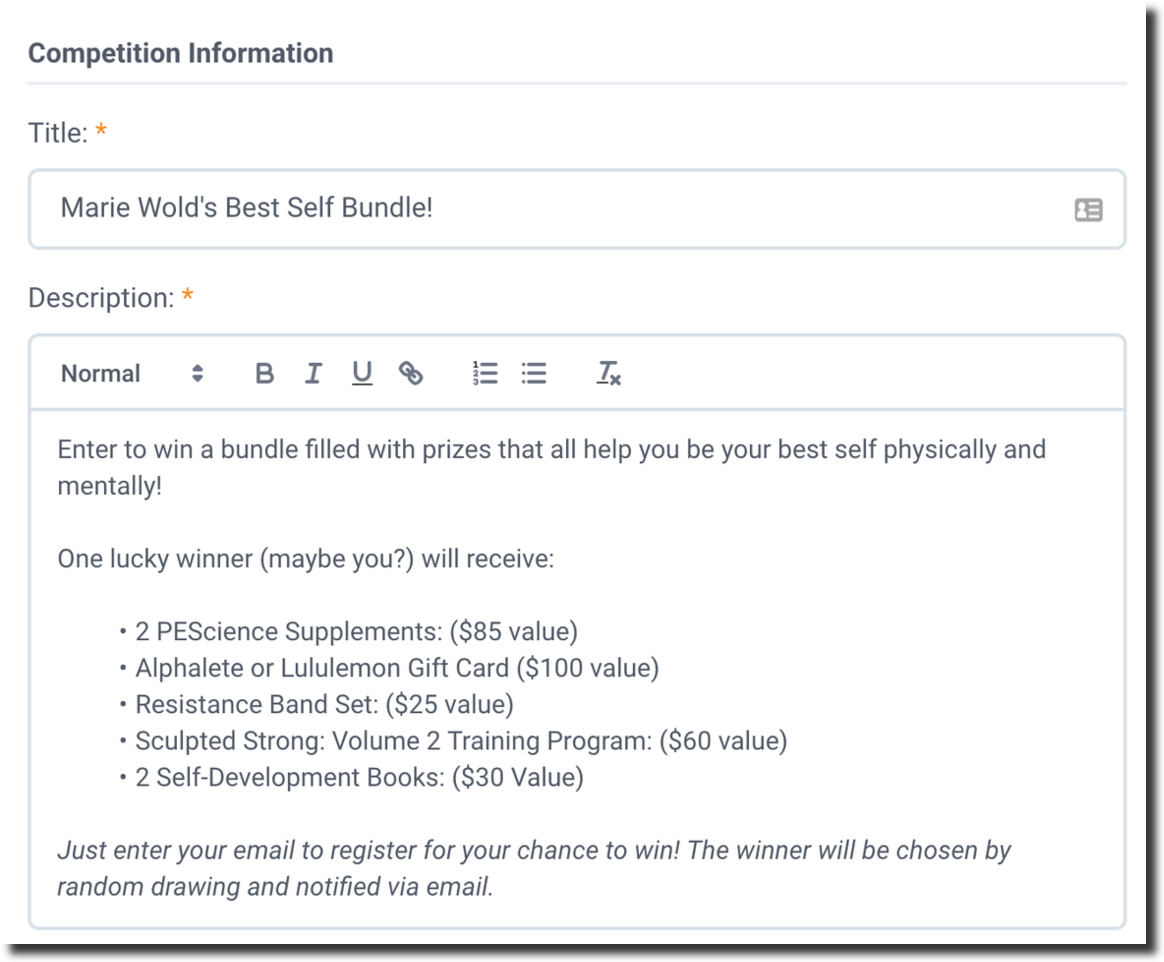 No fancy pictures or epic content — just listing her home items to give away.

Next, she set up a bonus entry for entrants to follow her on Instagram. After anyone entered the giveaway, they had a chance to follow Marie for extra chances to win.

This simple one-two punch did great. Marie’s follower growth was 377% higher than normal during her giveaway. 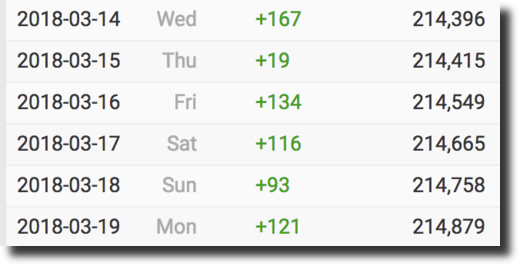 But if she wanted her Facebook, Twitter or YouTube to grow, all she had to do was add her other social profiles to the giveaway, too.

While running bots may save you time because you don’t have to manually follow-unfollow, it can turn awkward REALLY fast.

Hootsuite ran an experiment that used automation software to comment on photos with certain hashtags.

The experimenter picked generic comments that cover almost any situation:

Within 12 hours, the experimenter had 6 new followers, 40 new likes, and 25 new comments. Not bad for relatively zero work…

But then the downside hit.

What he didn’t expect was the string of AWKWARD situations:

The final result was he gained 250 followers in 3 days… but the bot had to follow over 1,400 people in order to get those followers.

“You still have to put in work to earn engagement on your photos. You can’t automate the kind of human interaction users will expect from brands.”

Compare this to running a giveaway and setting up a special tweet to get more followers, like New York Times bestselling author Ryan Holiday did.

First, Ryan set up the following tweet code on the giveaway:

This custom message text helped push Ryan’s Twitter following to the next level.

How do you find influencers?

How do you send a compelling email so they WANT to help you?

After all that effort… how do you even know it’s going to work?

Finding an influencer takes a lot of time and effort. We know because we’ve tried influencer marketing in the past.

Even with really warm leads we at most average a 50% response rate. Look at all those failures!

If you decide you want to pay an influencer and avoid cold outreach, it can save you time… but it’s expensive.

And when you pay for an influencer, engagement isn’t guaranteed.

Instead of wasting money or time on influencer outreach, a recent author launched a Walking Dead Super Fan giveaway.

To get more social followers from his giveaway, the author set up a few simple bonus entries for entrants to follow on Facebook or Twitter for more chances to win. 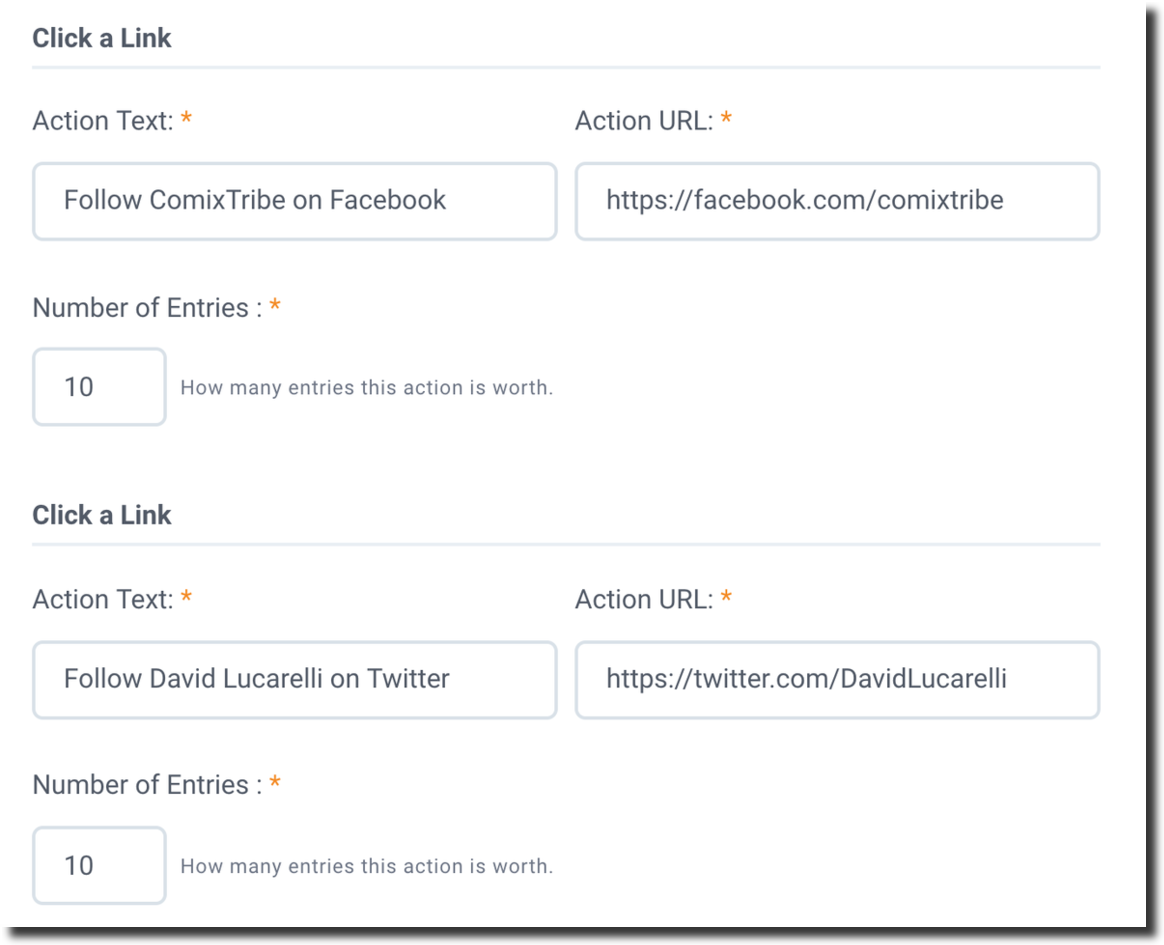 Maybe you’ve been learning a lot about online marketing and think you know how to grow organically.

You get started… and you realize it takes TOO LONG.

Instead of hundreds of new followers per day, your social growth looks like this…

Posting 10 times per day and using hashtags is time-consuming.

To grow organically, it often takes months or years waiting for your lucky break.

Giveaways can grow your social following EASIER and FASTER.

For example, a recent giveaway creator grew their social following by 2,500 in a few weeks using a simple bonus entry.

Compare to their normal growth of 61 followers per day, and you’ll notice how effective giveaways can be to get your more followers. 🚀

Last year, we ran Facebook Ads for another one of our businesses.

After running ads for months, we optimized, tweaked, and tested…

And as the Facebook Ads platform changes because of all of Facebook’s privacy issues, the competition is gonna be more intense.

For many online advertisers, Facebook advertising is going to cost you more time and money.

As a Facebook Ads alternative, one company decided to give away recent a pair of athletic shoes and a sports recovery drink.

The giveaway got 3,226 entrants and only cost $200. That’s $0.06 per entrant, many of whom can be turned into social followers by asking them to follow their social pages for more deals. 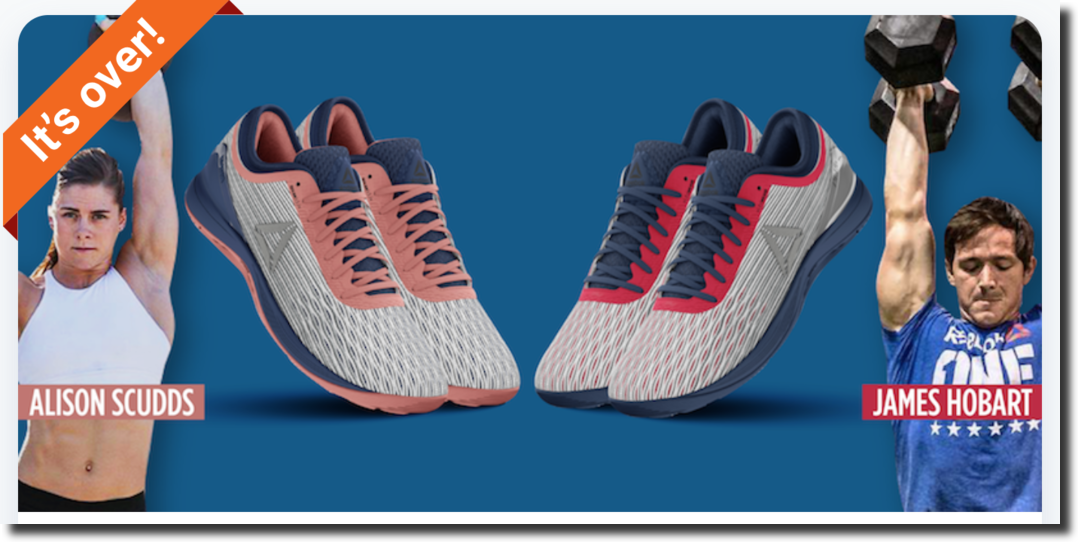 Instead of wasting time or money trying to grow your social following, use giveaways to get more followers quickly and inexpensively.